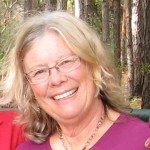 Sonja has lived and worked in the Denali/Healy area since 1971.  She worked in the tourism industry and for the National Park Service for several seasons prior to being employed by the Denali Borough School District where she taught for 25 years.  She served as Alaska’s State Teacher of the Year in 1998, and was selected as a Fulbright Scholar to study folk art in Slovakia and the Czech Republic in 2003.  Sonja has emphasized the integration of art into all subject areas, and has helped to coordinate student work with community needs. She taught art at the high school level, and led intensive workshops in puppetry performance, fiber arts and world textiles.  Sonja founded and co-published Denali Summer Times, where for fourteen years, local and student writers and artists were featured.  She has studied in Japan, Korea and Brazil, and led student trips to Japan and Eastern Europe.  Since her retirement from teaching in 2008 she is one of the founding members of the Denali Arts and Humanities Alliance, serves on the board of Kids in Motion, and is a consultant in the arts and service learning, and global citizenship education. She received the 2010 Interior Alaska Mayors Award for Art Advocacy.

Support Arts Education in Alaska by donating to the Alaska Arts Education Consortium, AAEC is a 501(c)3 non-profit organization. Your donations are tax-deductible.